Our latest trip took us to Northumberland and the picturesque town of Alnwick. I’d been invited to a complimentary sample of the new menu at ‘The Tavern Steakhouse and Lodge’ following their recent £100k refurbishment and relaunch on the 26th of March, 2016.

Loving Alnwick, barter books and of course steak, I drafted in the future wifey, and we decided to have a day trip there. We headed through on a Saturday, and after some mooching round, we made our way to The Tavern Steakhouse at around 4 pm.

From the outside, the venue looks much like any other bar you would find in Alnwick. It’s really in keeping with the local area, which I think is important for somewhere as traditional as Alnwick. 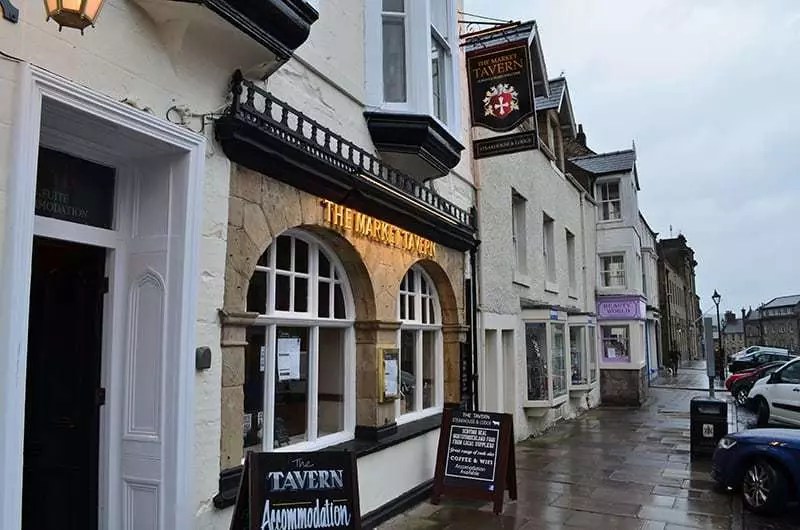 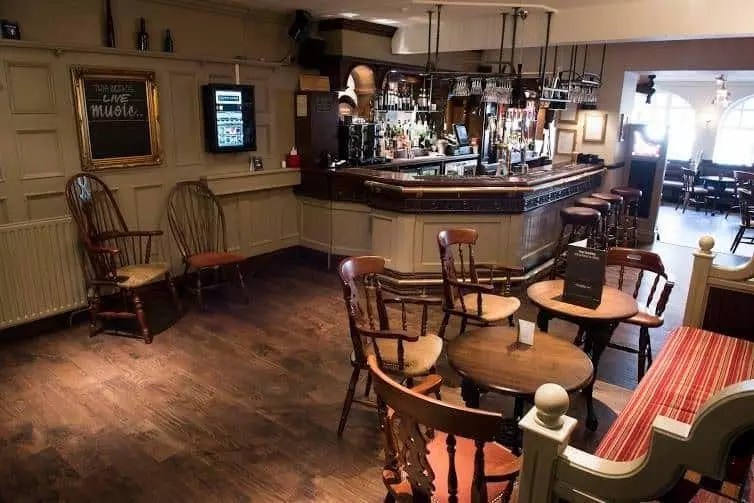 The bar area has a rustic design, and the restaurant itself is stunning. I would one day like to own a restaurant, and the moment I walked in I thought…”Wow, this is the kind of place you could be proud to own”. 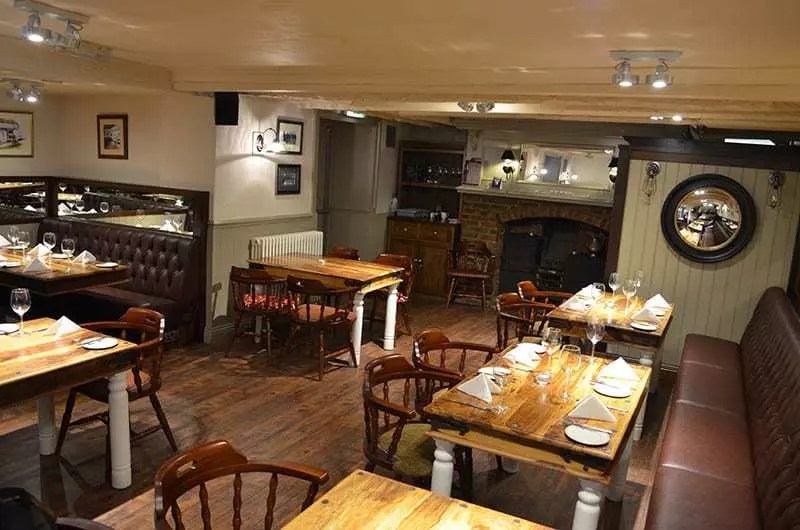 The bare polished wood, subtle colour scheme and perfect use of space make for a stylish and comfortable environment. I think I’m so used to walking into new restaurants crammed with Edison bulbs and steel plates, that it was refreshing to visit an impeccably styled eatery like this.

I don’t always mention the menu in every review I do, as to be honest, sometimes it’s not worth it. However, The Tavern Steakhouse and Lodge menu had a mouth-watering selection of locally sourced dishes that all sounded delicious.

As their menu states, they source all of the ingredients from local suppliers which I’m 100% behind. I think it ensures the survival of homegrown produce, provides better quality dishes and for the best part, shows a passion for the food that is being served. 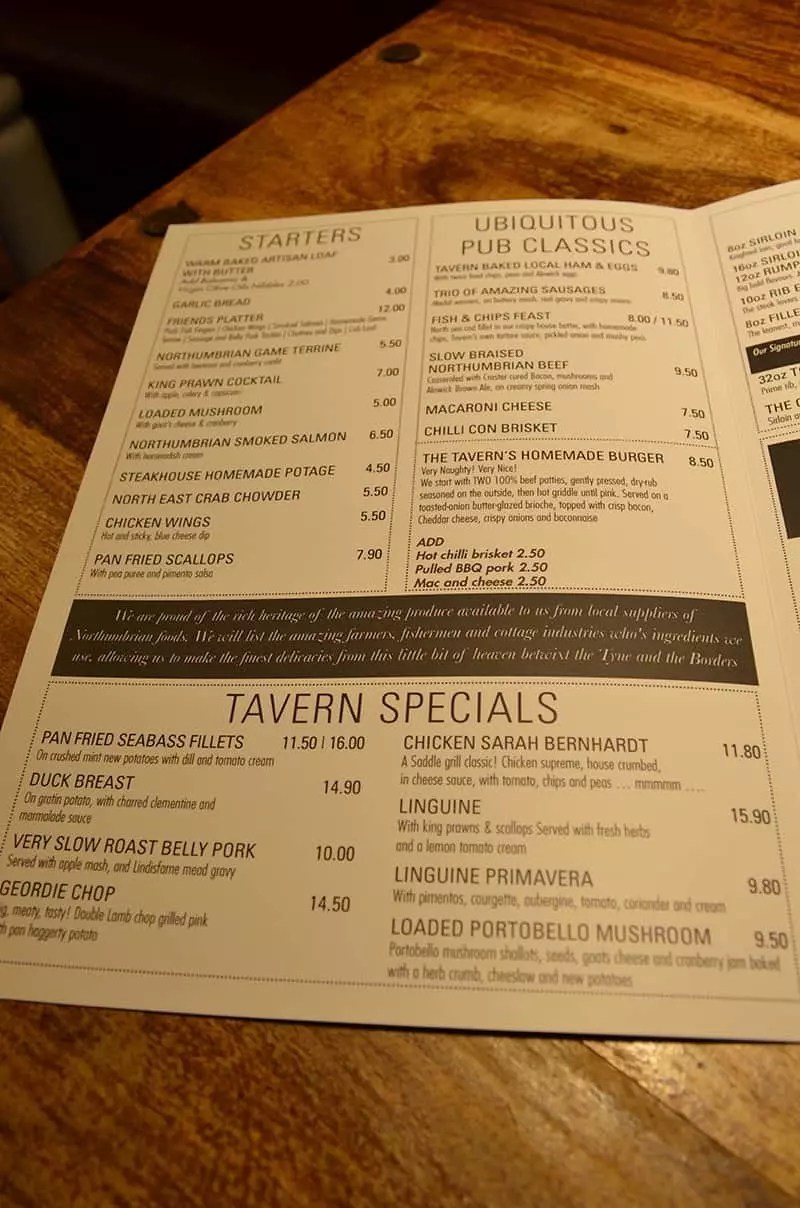 For starters, we decided to share a plate of scallops. For our main courses, we chose the 12oz Rump Steak and the Very Slow Roasted Belly Pork.

I was a little disappointed that the belly pork (A personal favorite) wasn’t available and given it was 4 pm on a Saturday, I was a little confused as to how it had already run out – a very busy Friday perhaps. So instead I decided to go for the Geordie Chop or a double lamb chop to you and me.

First up, were our scallops (£7.90 on the menu). Regarding presentation, the dish scored full marks, but regarding taste, it fell a bit short. The scallops themselves had a smooth texture, but unfortunately not enough flavour. 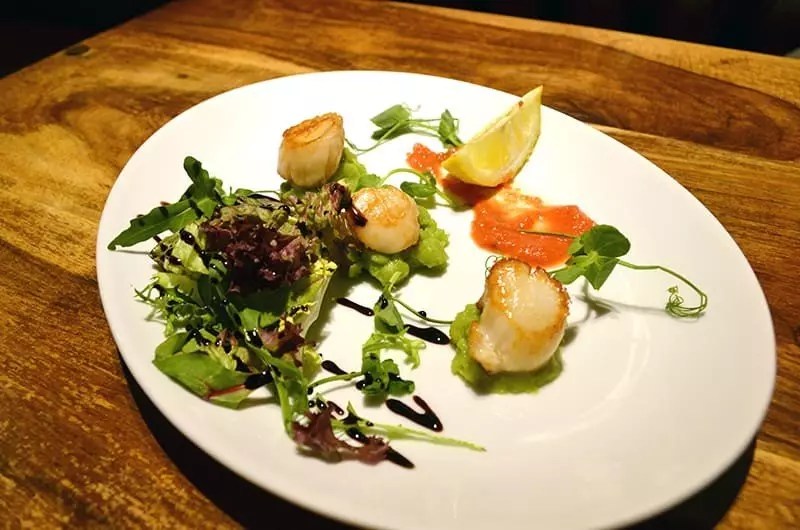 As for the dressing, the pea puree had little to no taste, and the pimento salsa had almost the exact texture and flavour tinned tomatoes. The salad was fresh with a wonderful dressing, but that shouldn’t be the highlight of a dish like this.

As I say, the dish was a bit of a letdown. In addition to this, we then had to wait about 10 minutes for our empty plate to be cleared, which was excessive, given that we were literally one of the two occupied tables in the restaurant. The waitress who initially served us had disappeared into the kitchen, and it was a different member of staff who took our plate after walking through from the bar area.

He then produced our main courses which smelled amazing. He seemed a bit bemused when I started taking pictures of my food with an SLR and even commented on me doing so… clearly some confusion there!

Future wifey was served a sirloin steak (£20 on the menu, but not what she ordered…) but to be fair, it looked downright mouthwatering, so she decided not to say anything. 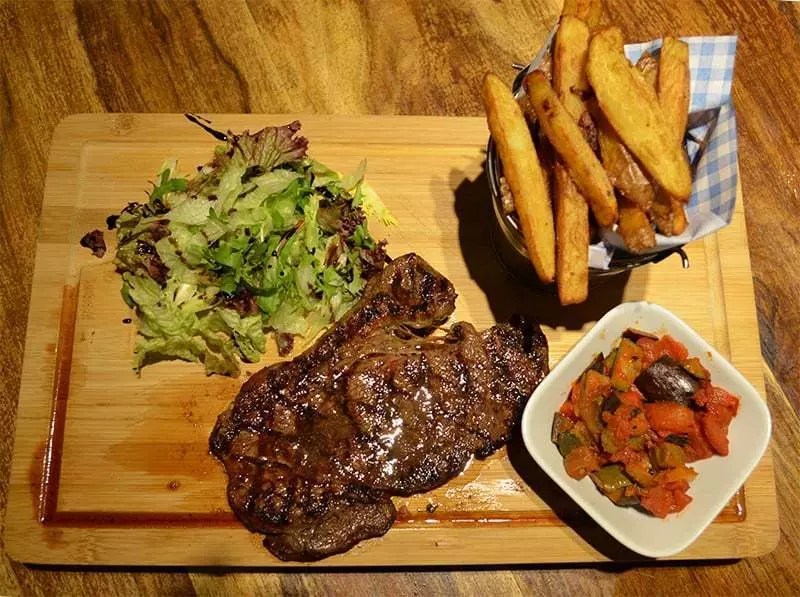 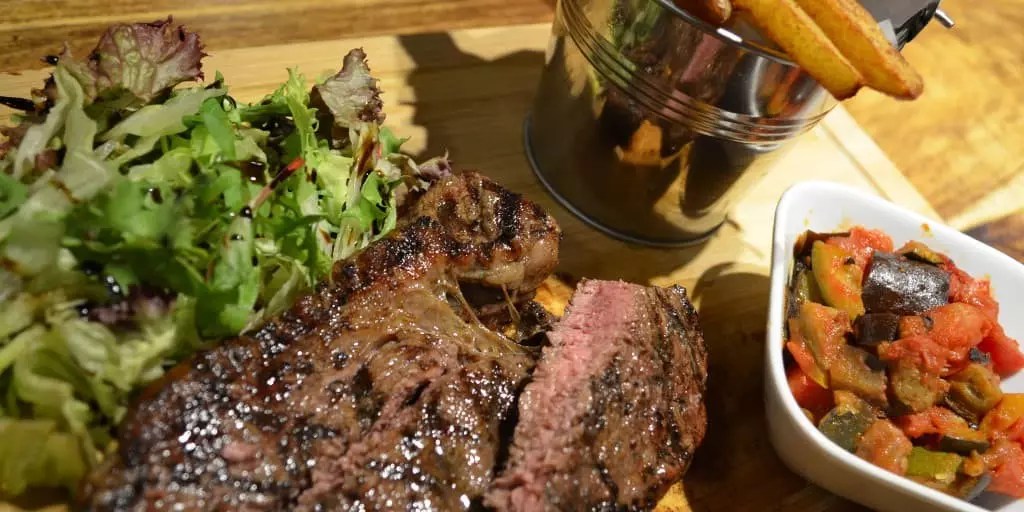 The steak was cooked medium rare and seasoned well. It was perfectly seared on the outside and succulent and pink on the inside. We couldn’t fault the steak at all, and the portion size was more than enough.

The accompanying homemade chips were crispy on the outside (skin on) while light and fluffy on the inside, top chips! As for the ratatouille, it was fresh and a great finish to the dish.

As for me, I got the double lamb chop (£14.50). This was served pink, alongside a stack of pan haggerty. 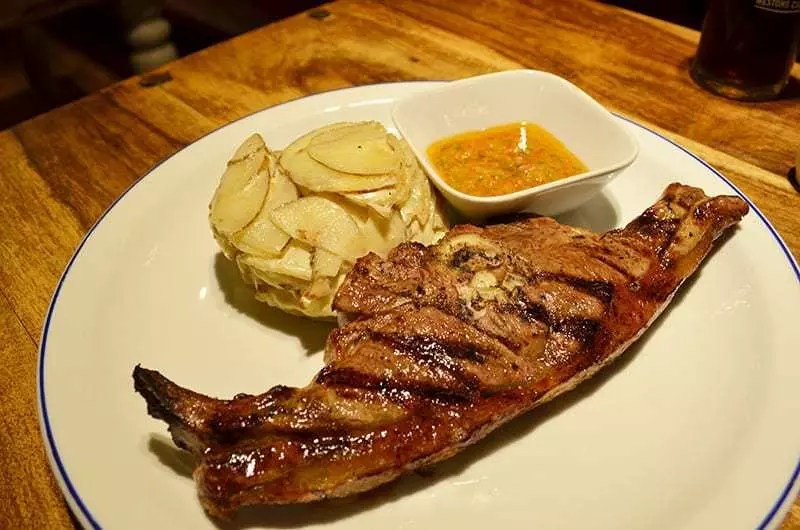 Once again, this was cooked perfectly with lovely charing on the outside and pink throughout. The lamb was fantastic; bursting with fresh flavour from the middle and sinfully delicious crispy fat.

The pan haggerty was well cooked with a good texture to the potatoes, which were not overcooked. The sauce was deliciously smooth and creamy. In all this dish was beyond tasty and would certainly be my recommendation to anyone who likes red meat.

Ultimately, I did enjoy my visit to The Tavern Steakhouse and Lodge, and I would like to think the couple of issues I did have can be put down to teething problems given their recent relaunch.

I’m not sure if the staff were preparing for the evening rush, but I think the service could use some work. I would like to revisit in a few months time to see if things have settled into a routine, as I know once the kinks are ironed out, the restaurant has the potential to become Alnwick’s top eatery.