The Grand Hotel is located on the Tynemouth seafront, overlooking the expansive beaches of the North East coastline. I’ve been to Tynemouth quite a lot, with Riley’s Fish Shack and the Buddha Lounge just around the corner, so when we were invited to sample the new menu I couldn’t wait to get back.

The hotel’s restaurant, The Brasserie, has recently come under new management and after a refurb is due to reopen on the 10/10/2016. They have planned an entirely new menu, with the aim of providing an affordable dining experience that will appeal to locals looking for a brilliant night out, even without a special occasion. 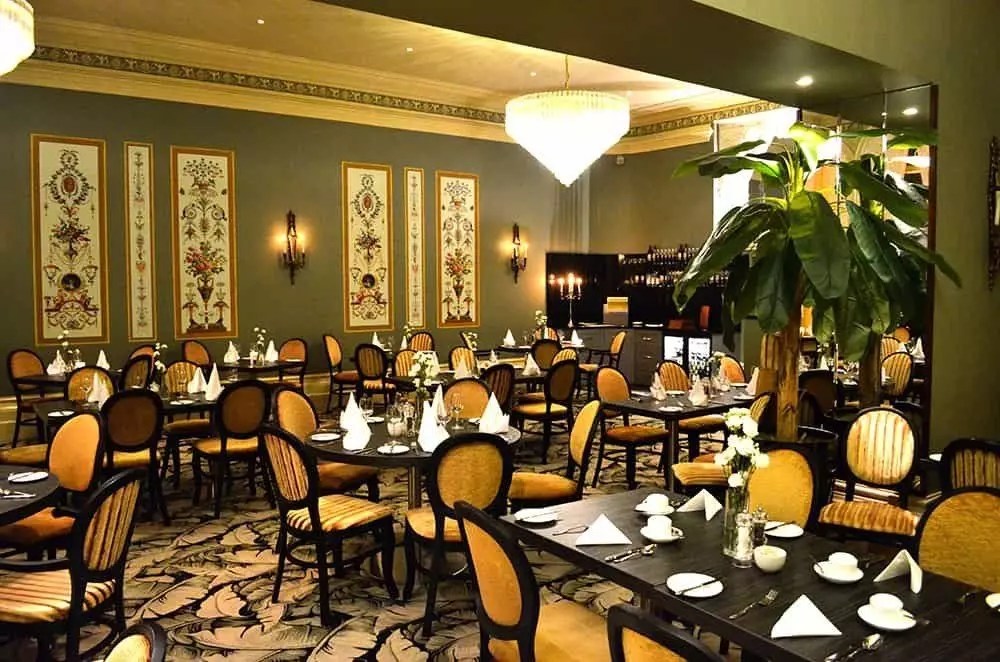 The restaurant itself is extremely welcoming, with the stylish decor and relaxing background music making a fantastic atmosphere in which to dine.

On our visit to the Grand Hotel, we were treated to their new taster menu. At £31 per person for 7 courses, this is certainly something that would appeal to me on a normal visit. I was informed it had some of the best courses from their main menu, so was I excited to see what the restaurant would have to offer. 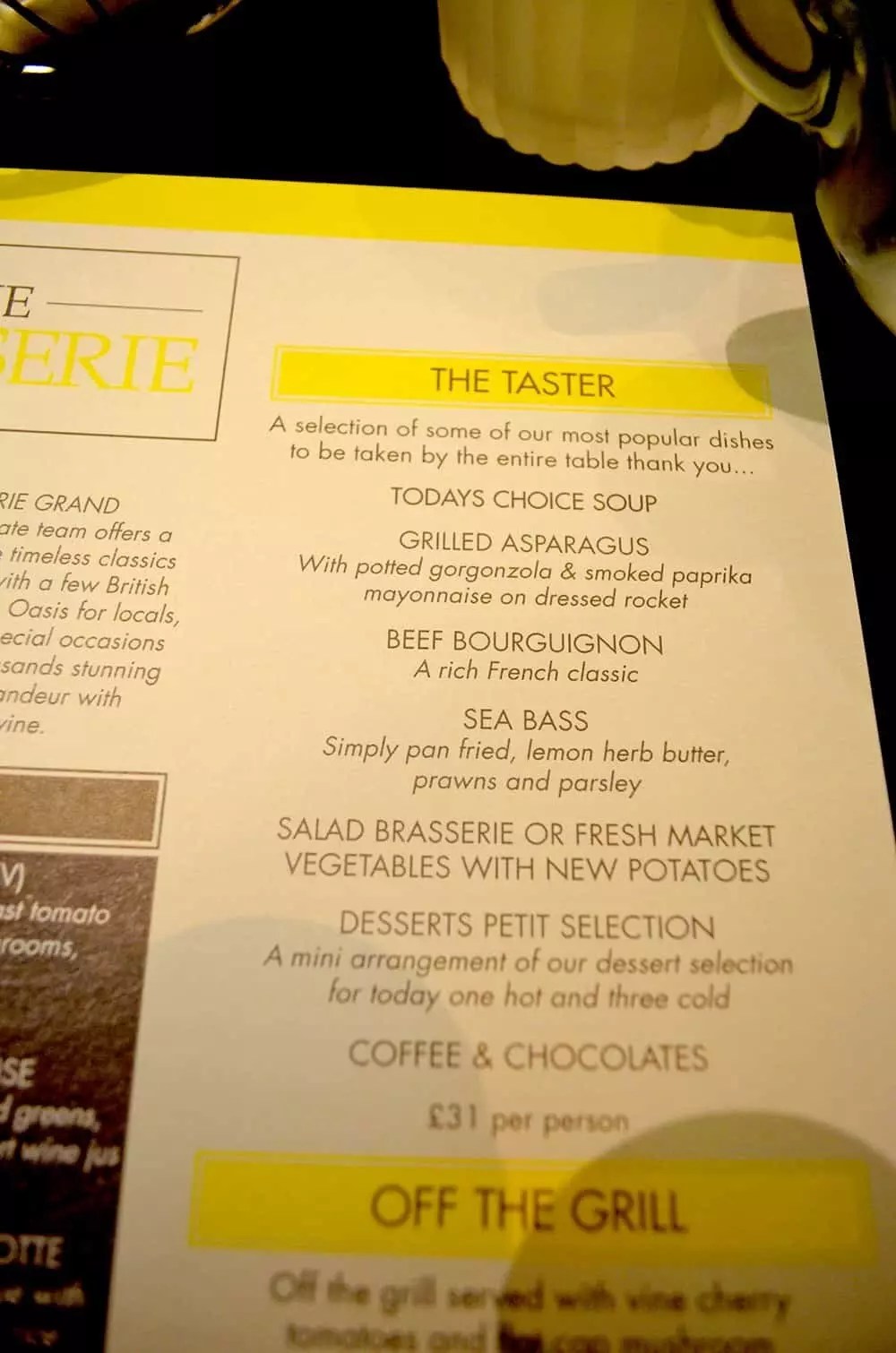 The prices seem extremely reasonable across the full menu, with an eclectic mix of dishes that should have something for everyone. 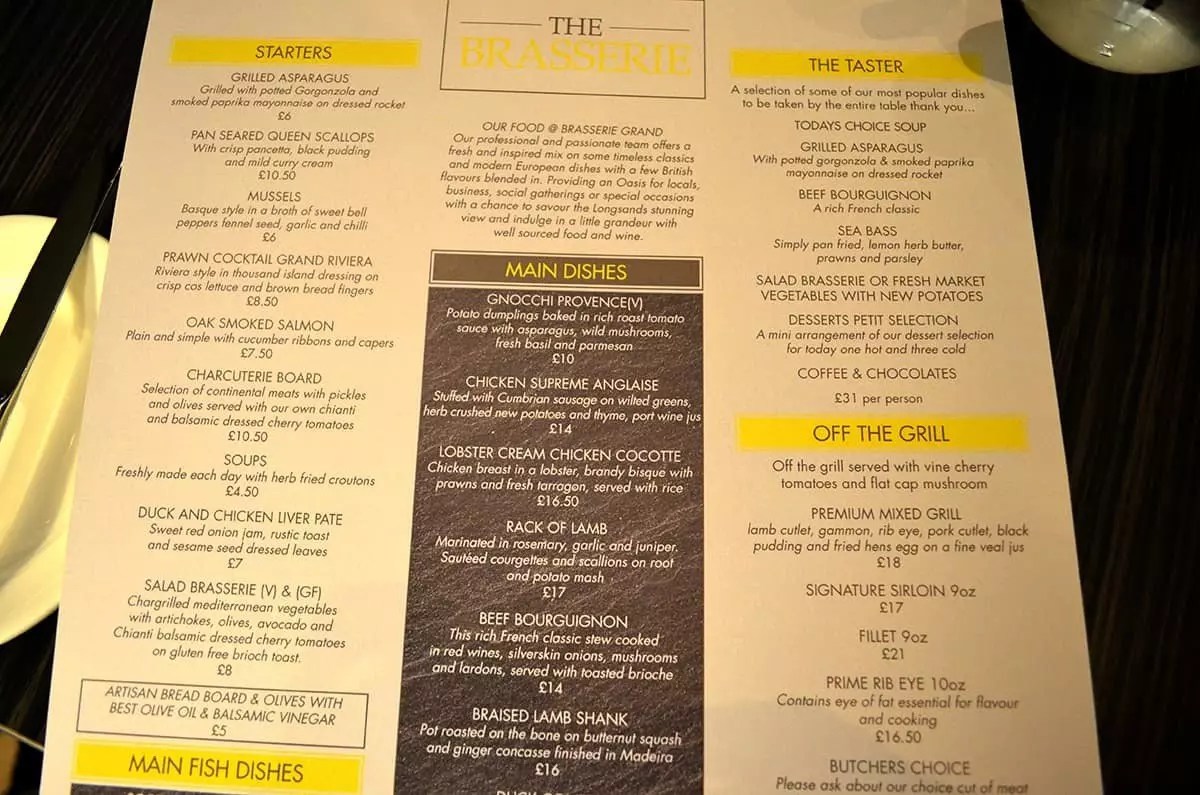 Our first dish on the taster menu was a bowl of Northumberland Broth, with fresh brown bread and croutons. The broth was a hearty mix of vegetables, well seasoned and in all a very tasty starter.

But, more importantly, the dish took me flying back to my Nana’s kitchen when I was younger, where she used to make a very similar soup. It was a not only a great dish but probably couldn’t have a stronger connection to the North East for me. If it was me I would go for mini dumplings instead of croutons, but that’s just me! 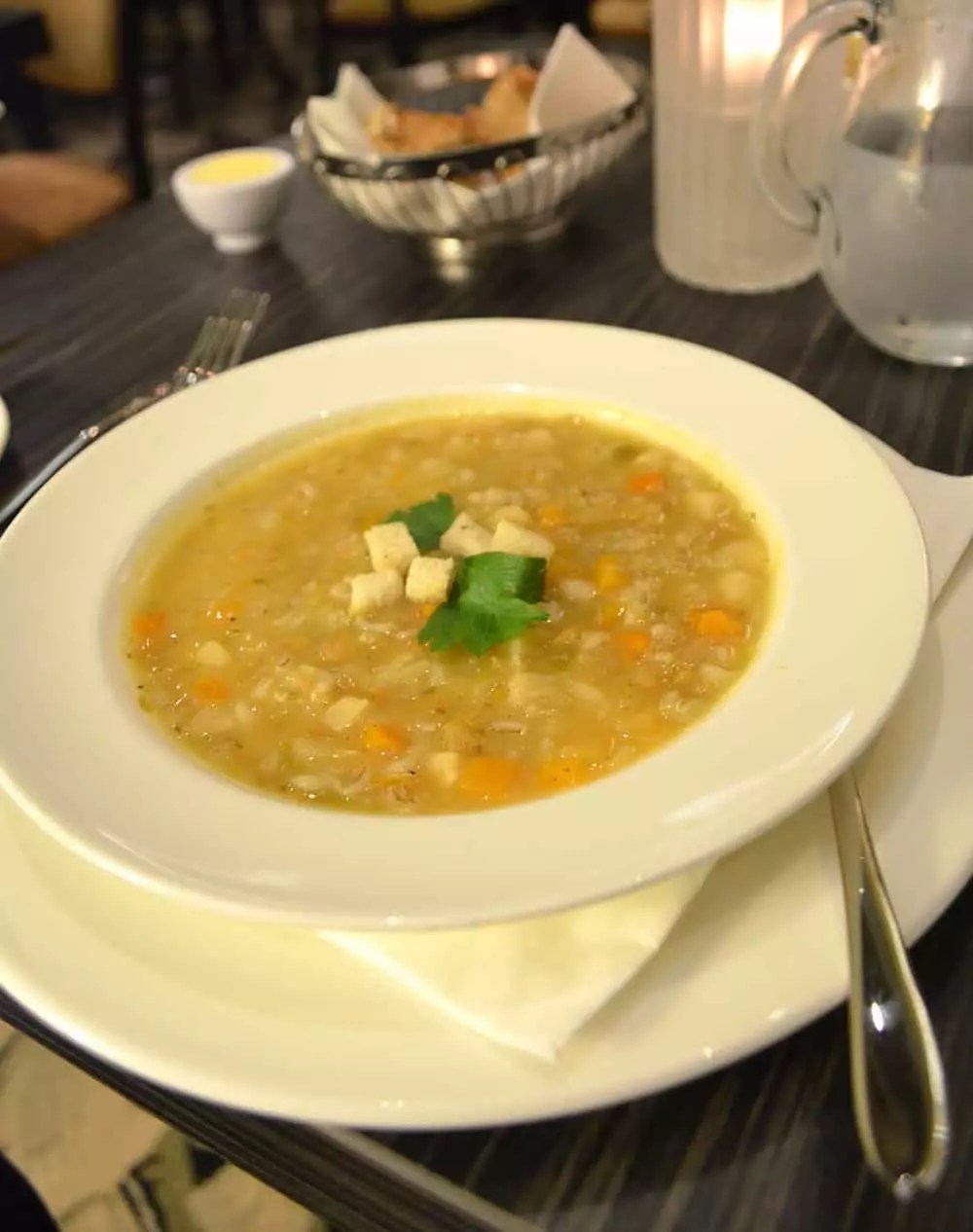 Next up was the grilled asparagus wrapped in Parma ham. The dish was accompanied by Smoked Paprika and Gorgonzola Mayo, which I must admit isn’t something I’ve ever tried before. 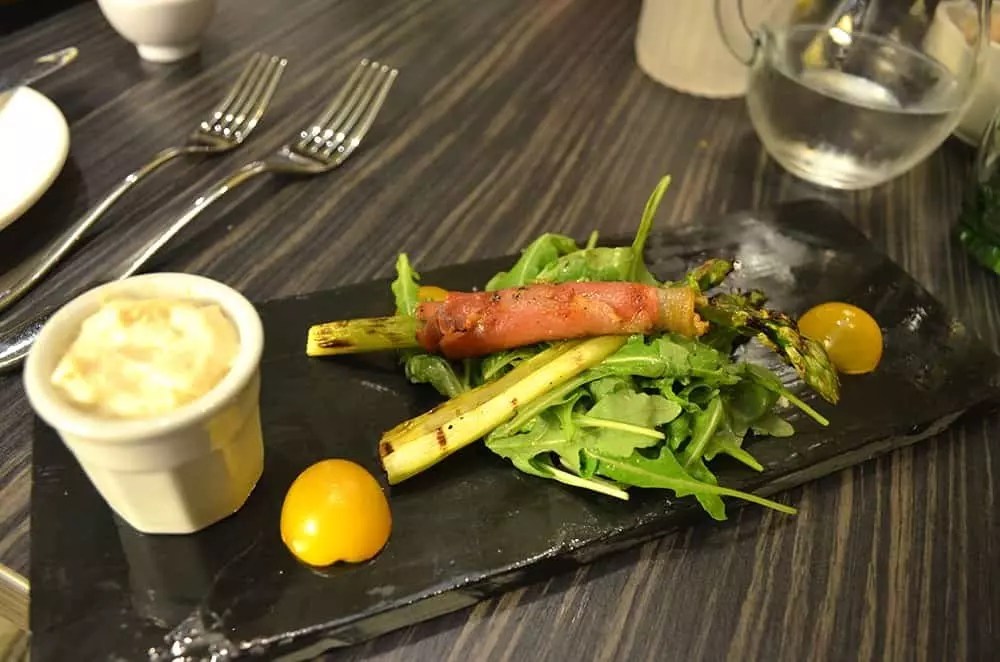 The asparagus had a nice bit of crunch to it, with the saltiness of the ham making a really well-balanced dish. I wasn’t sure what to expect from the sauce, but it had a rather subtle flavour which didn’t overpower the rest of the dish.

Even the salad, with dressing and parmesan shavings, was a cut above average and thoroughly enjoyable.

The next dish was pan-fried sea bass, with lemon and herb butter, prawns and parsley. Again this probably isn’t a dish that I would normally choose, but being a taster menu, I put my faith in their hands. 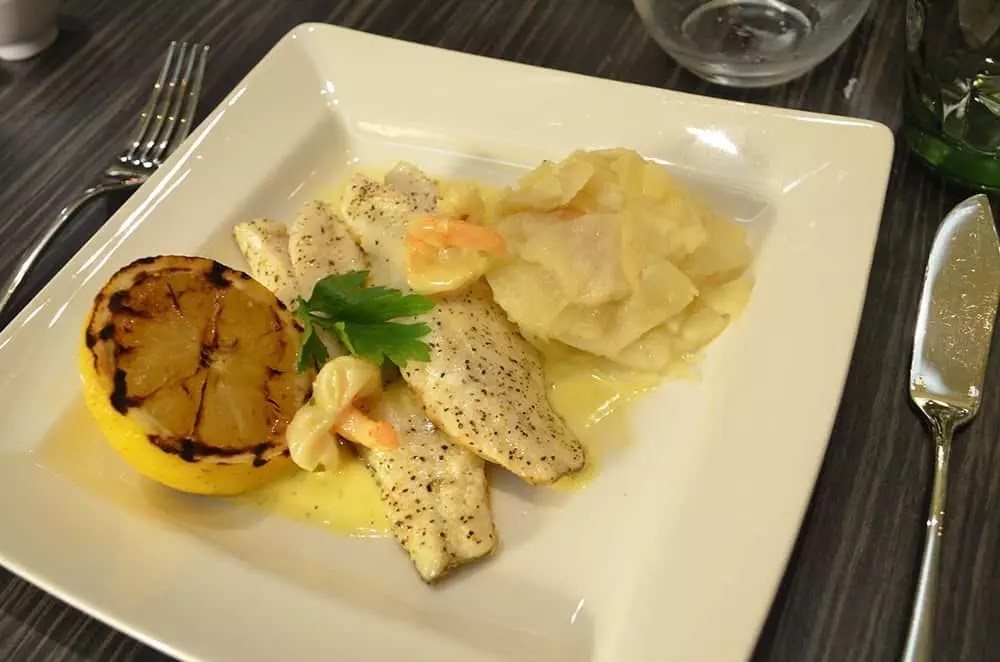 Good call! It was a really great dish, with three succulent bass fillets, with delicious crispy skin to boot. The sauce was perhaps a little bland for my tastes, but with Sea Bass being quite a delicate flavour, maybe it was so as not to overpower it too much with a stronger sauce. The potatoes were well cooked and pretty filling, maybe not needed with the number of courses!

I wouldn’t have written home about the prawns, which I think could be swapped out with something a little more show-stopping like tiger or langoustine. For the price it’s understandable, but I would have traded one sea bass fillet for better prawns. You’ve got to have your seafood A-game with Riley’s just down the road to be fair!

Next up was a hearty portion of beef bourguignon, with a large side salad. It was at this point I was trying to work out if they were trying to kill me with too much food, but being the polite chap I am, I thought I would give it my best. 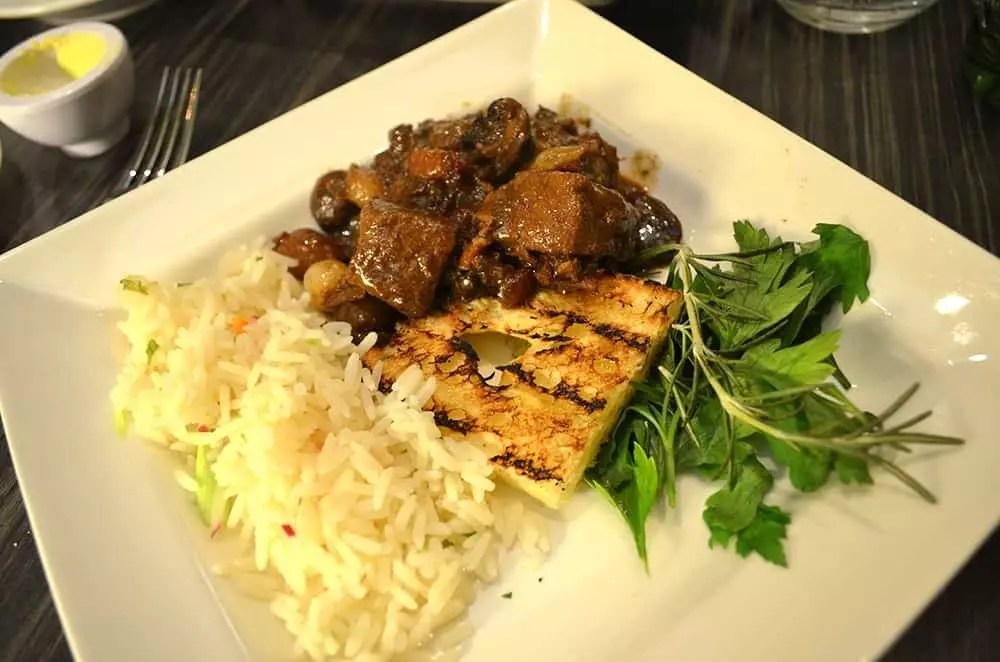 The beef bourguignon was extremely rich and packed full of onions and mushrooms. The beef was unbelievably tender and melted in your mouth instantly. This dish was packed full of flavour, and the stew alone was very filling.

It was served with toasted brioche bread and rice, which seems like a bit of a strange pairing for me. I think the stew could have been served alone, with some toasted white bread, which would have been more than enough and worked a bit better. 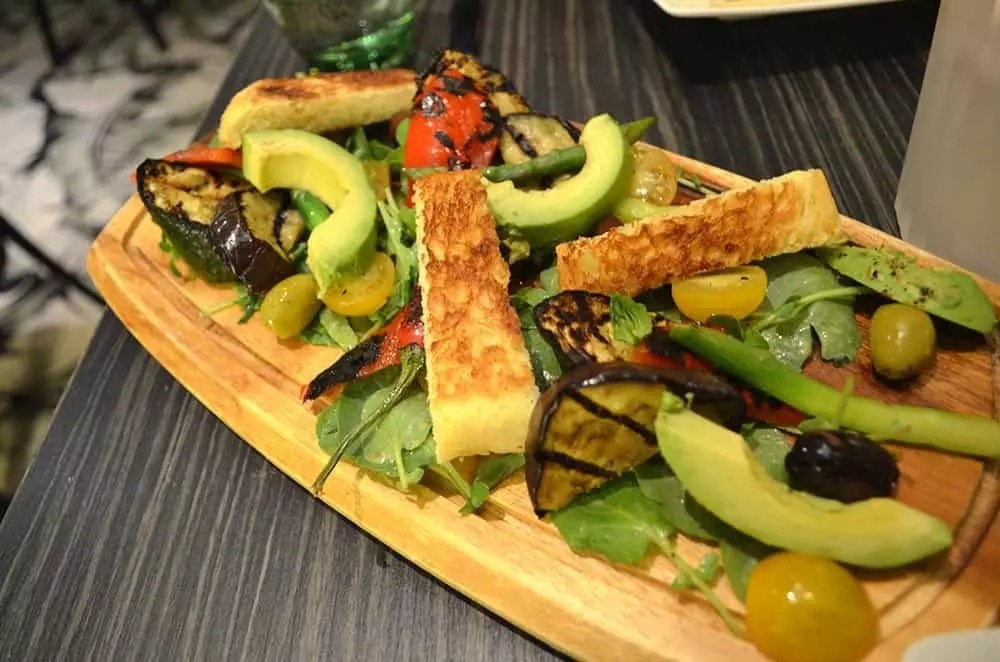 Again, the side salad, although nice, seemed very out of place with this main course. Sweet brioche, chargrilled Mediterranean vegetables, olives and avocado, tomatoes and balsamic dressing wouldn’t be my go to when pairing with a rich beef stew. I think this would have been a fantastic starter, with potatoes and seasonable vegetables making more sense here.

To finish, we had the three tart selection which came with vanilla and poppy seed ice cream. 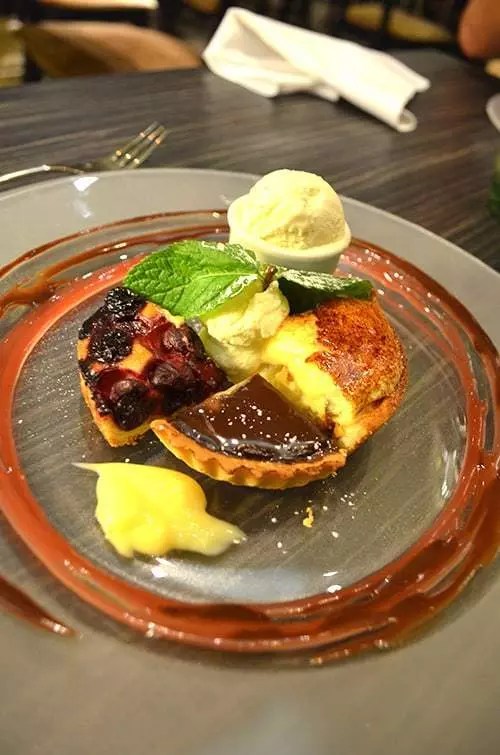 I couldn’t fault the desert at all and really struggled to decide which tart was my favourite! The berry tart was particularly delicious. But the chocolate and apple custard were not to be ignored either.

However, the ice cream was the show stopper, which was so rich and creamy and the perfect way to end the meal. We decided to opt out of the coffee and chocolates, as at this stage we were absolutely stuffed! I’m a pretty big guy too, so when I’m full you can be pretty confident you’re in for a good portion!

Overall I thoroughly enjoyed my visit to the Grand Hotel and my dad evidently did too since he’s planning to book a table for his birthday at the end of this month!

In terms of value for money, the restaurant really does stand up to its goal of offering an appealing menu, which is affordable to more people for a normal meal out.

There is no pomp or pretense while dining there, but the standard of the dishes is as high as you would find in some of the top end eateries in Newcastle.

I can’t wait to get back soon and try some of the other dishes from the main menu, many of which look amazing. Rack of lamb here I come! In my opinion, the taster menu selection is a little confused and needs some refining, but if the individual dishes are a consistent indication of what the main menu has to offer, then I don’t think this is the last the Grand Hotel will be seeing of me.