With Bojo going off the rails and the weather having taken a turn for the worse, we figured the world needed a bit cheering up. So with that in mind, we’ve knocked up another heart busting recipe to brighten up your day, a new take the classic Saveloy Dip.

Being from South Shields, comfort food doesn’t get more local than a saveloy dip from Dickson. The butchers have been around since 1953 and have been knocking out these Northern delights for years. Even though I know they can’t be beaten, it was Michael Jordan who once said…

…also I’m a fatty who will deep fry just about anything! So with that in mind, I give you my legacy to the free world, our latest recipe…the Saveloy Dip on a Stick! 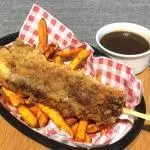 Saveloy Dip on a Stick

This calorific recipe is a new take on a Geordie classic. This versatile stick based snack can be eaten on the go or in the chair you can no longer stand up from!
Course Main Course
Cuisine Geordie
Keyword Saveloy Dip
Prep Time 10 minutes
Cook Time 8 minutes
Total Time 18 minutes
Servings 2
Author nefadmin

For those of you thank aren’t looking to turn your veins to concrete, you can always try out Dicksons healthier low carb recipe of Pease Pudding Pie!