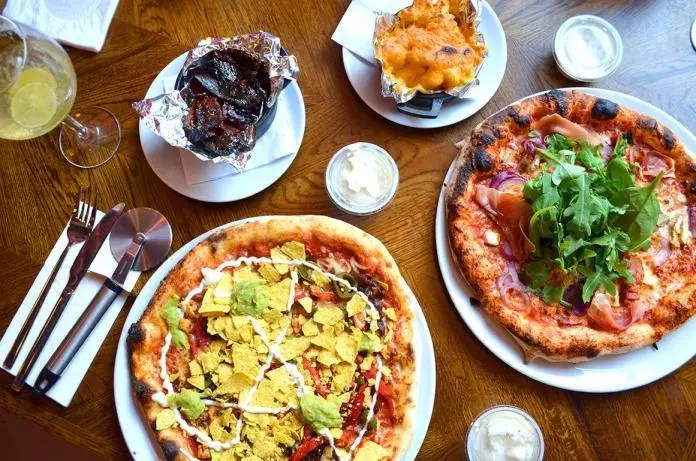 This week we were invited for a complimentary meal at Pizza Punks in Newcastle. They’ve opened up shop this year on Grey Street, a little down from the Theatre Royal. Their promise is:

“Inspired by our love of proper pizza and motivated by our drive to do something different, something unique. What would happen if customers could choose exactly what they want on a pizza without charging more”

With, dAt bAr well established just around the corner, serving up some pretty epic Sourdough base pizzas, we were excited to see what the new competition had to offer!

(We’re trying out new quick links so you can find the info you want faster. If you think it’s handy drop us a comment at the bottom and we’ll keep it going 🙂 )

The Venue | The Menu | The Scran |  The Verdict

The venue was pretty inline with what Newcastle and every other major city in the UK have come to expect from an edgy eatery like this. Bare bricks, wall art, industrial feel and plenty of natural light flooding the place. Frankly, the system works, so why mess with a good thing?

There was plenty of seating and I would expect to have no issues dropping in without a reservation any weekday. The L shaped seating area surrounds a beasty custom-made pizza oven with the company’s logo set into the surround. 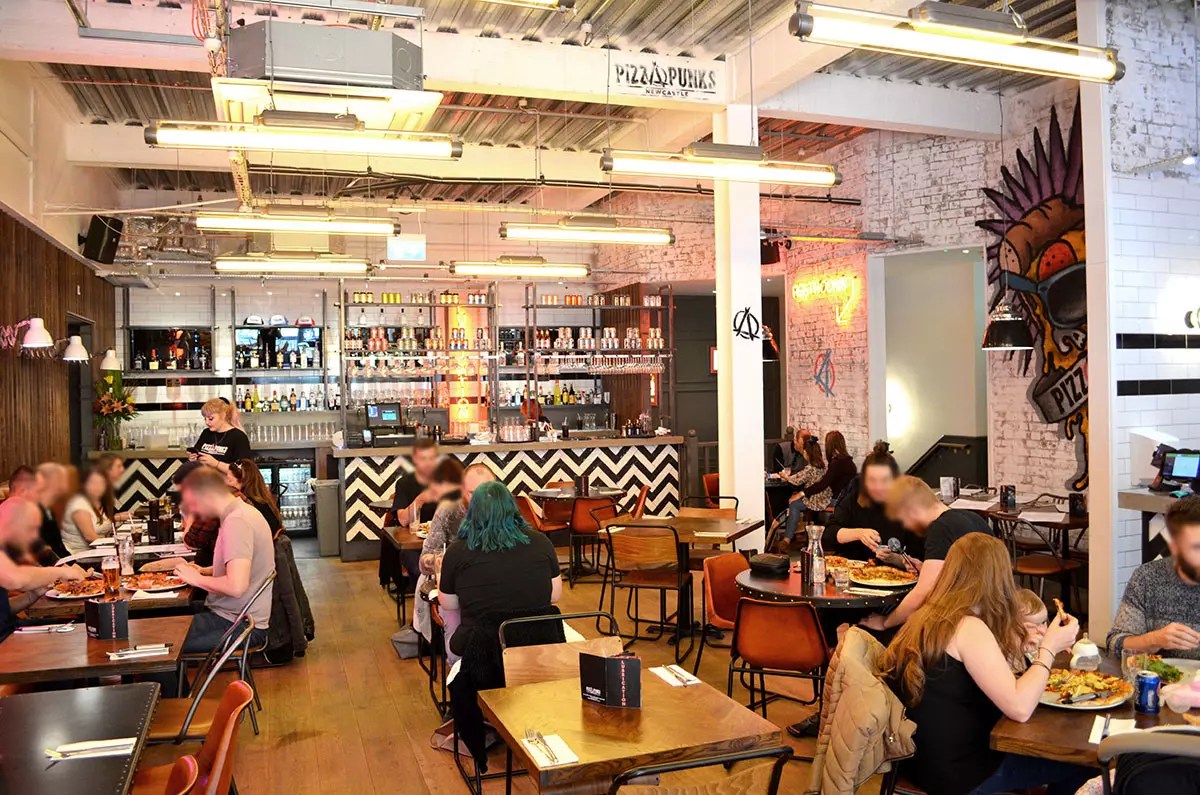 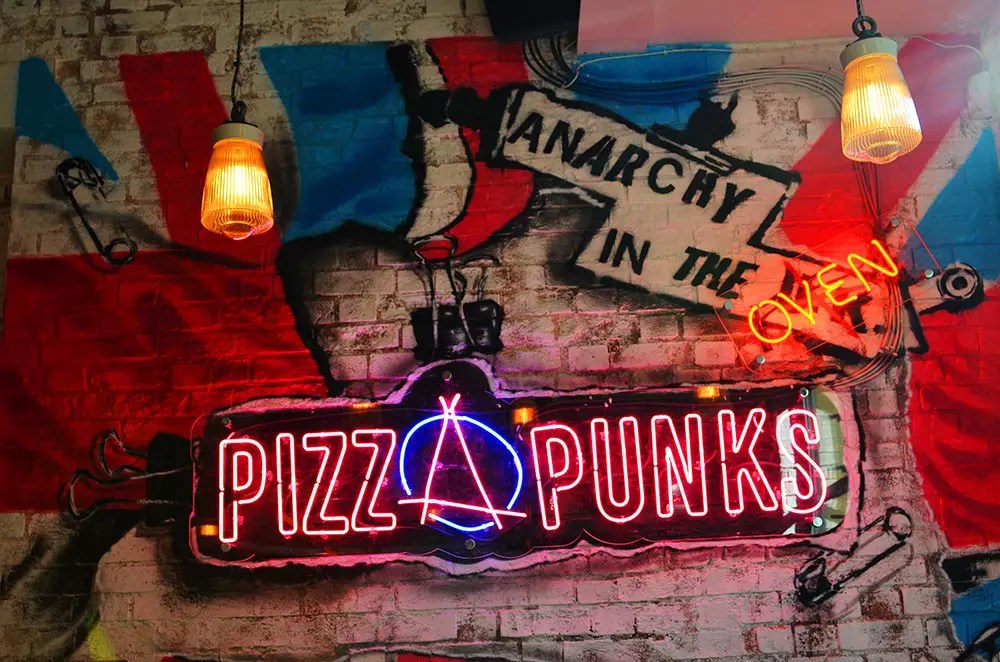 Apparently, it was a day’s work to get the Goliath of an oven in, with a crane lowering it  through the front of the restaurant before the windows were installed! Overall it’s a pretty sick layout and a laidback place to grab a bite to eat. It’s a very comparable layout/vibe to Red’s True BBQ in the gate. 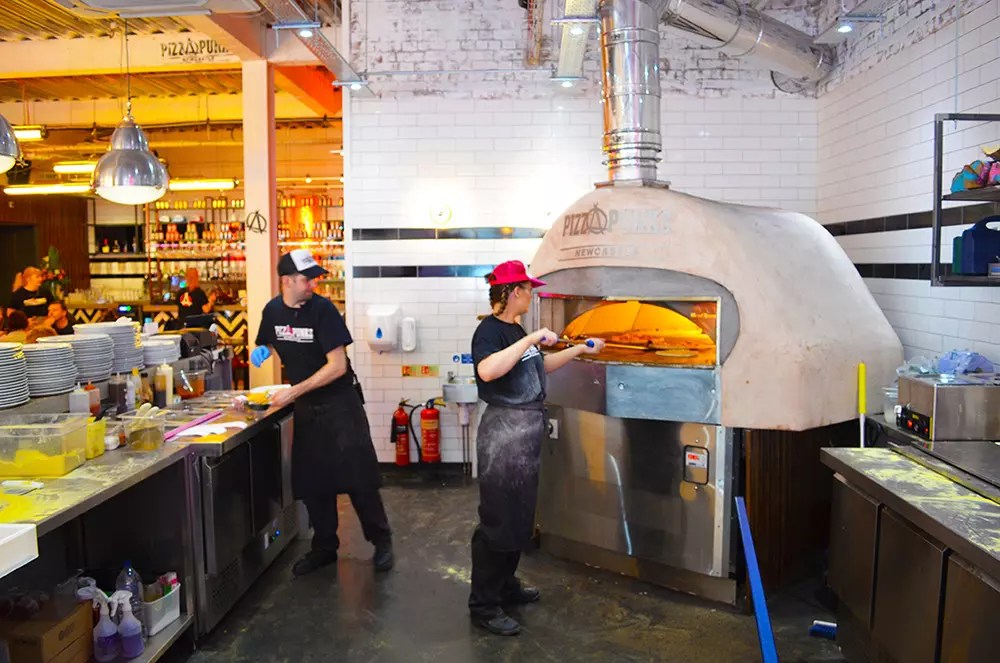 So onto the menu. There’s a pretty limited amount of starters, which given the approximate 1140 different possible combinations of pizzas, that’s probably a good thing!

The Pizza Punks’ Ethos is that they won’t charge more for toppings, no matter how many you want! Given the mix of options, this is a pretty sweet deal for vegetarians and carnivores alike! The pizzas are a flat £10, so whether you want a few toppings or everything on offer, that’s what you pay! 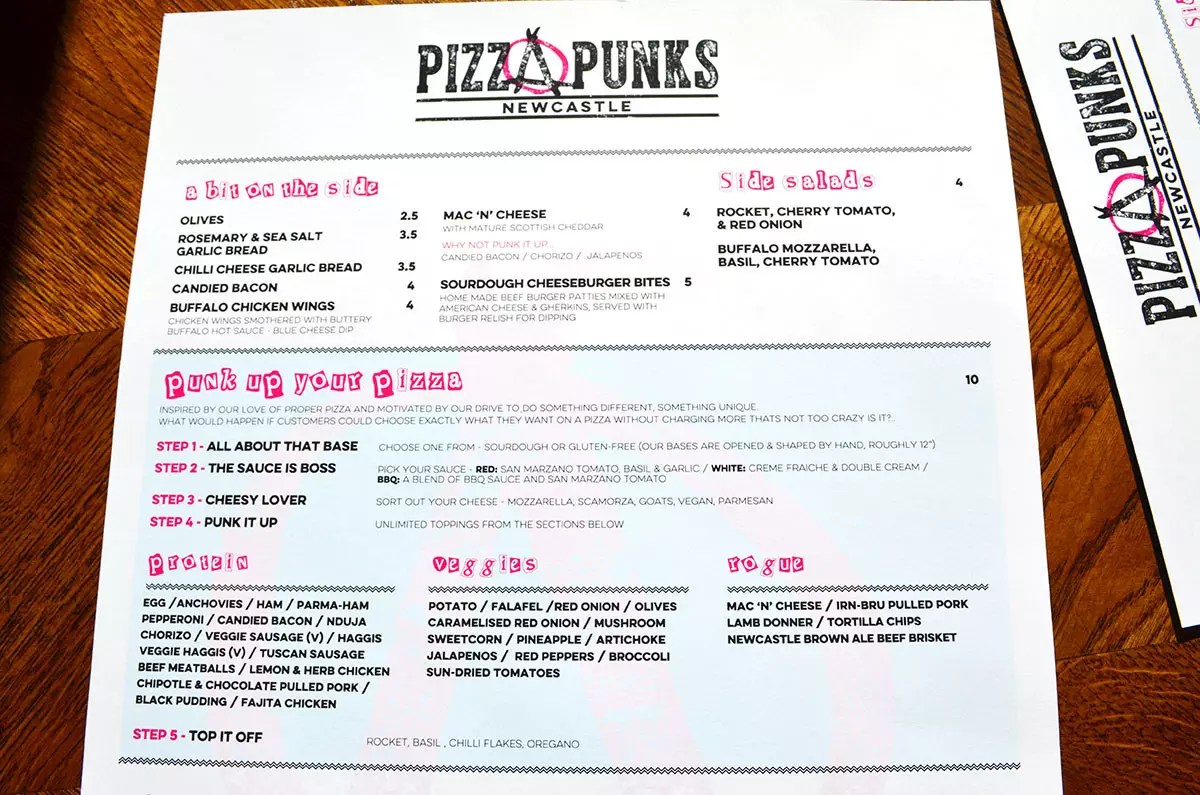 However, if you’re not in the mood to come up with your own creation (like me) there’s a set menu at the bottom to make life nice and simple. 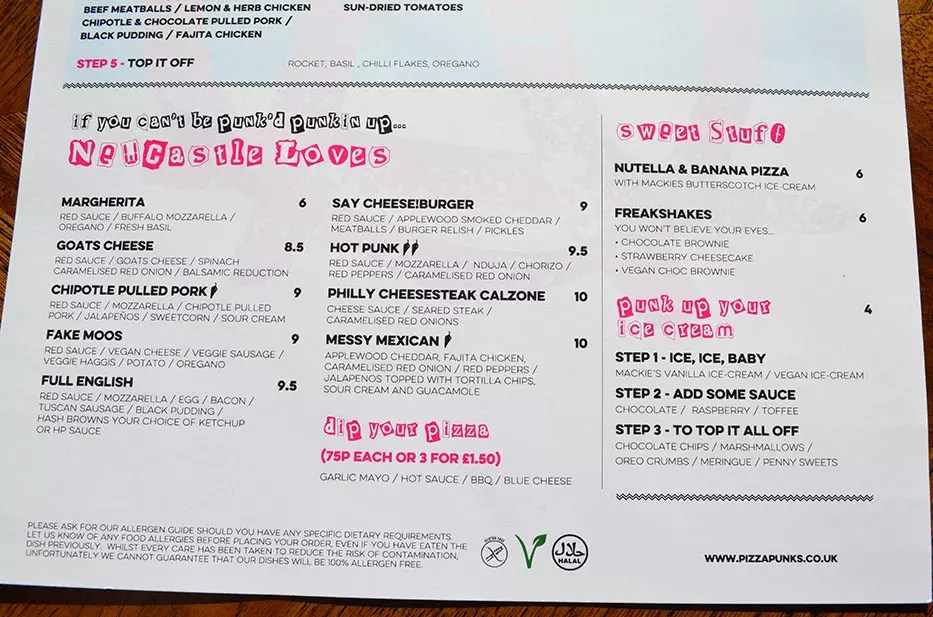 Their drinks menu offers up a pretty good selection too. There’s everything from craft beers, new takes on old cocktails and epic milkshakes. Pretty much something for everyone! 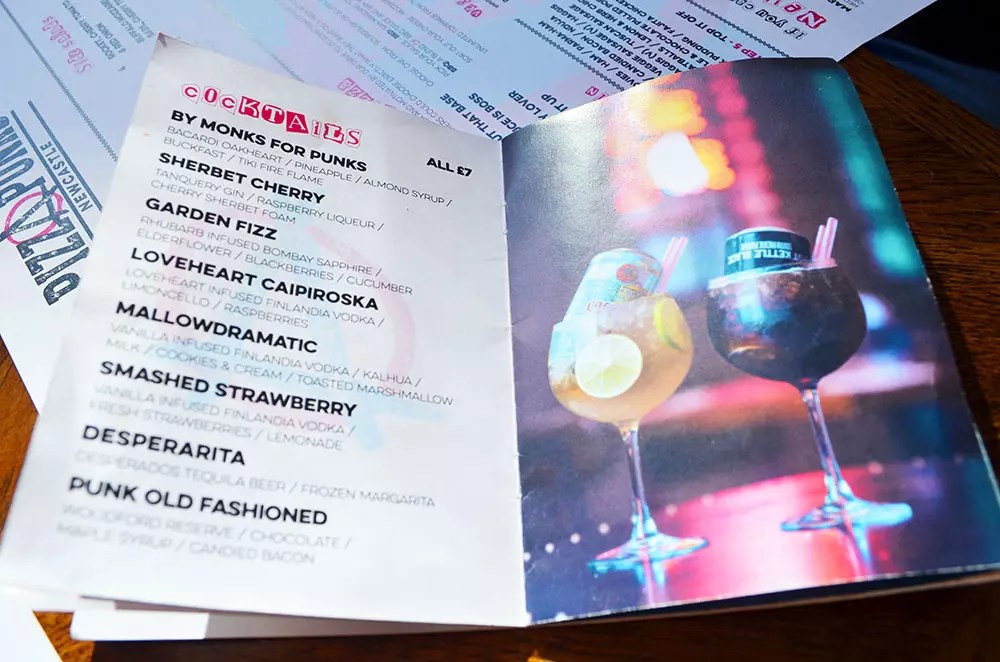 I opted for a Desperarita to drink, which was a frozen margarita with a can of Desperado beer plonked in. Sadly they were all out of the delicious tequila beer, so subbed it with Estrella, which was still pretty refreshing on the hot Newcastle day we visited. 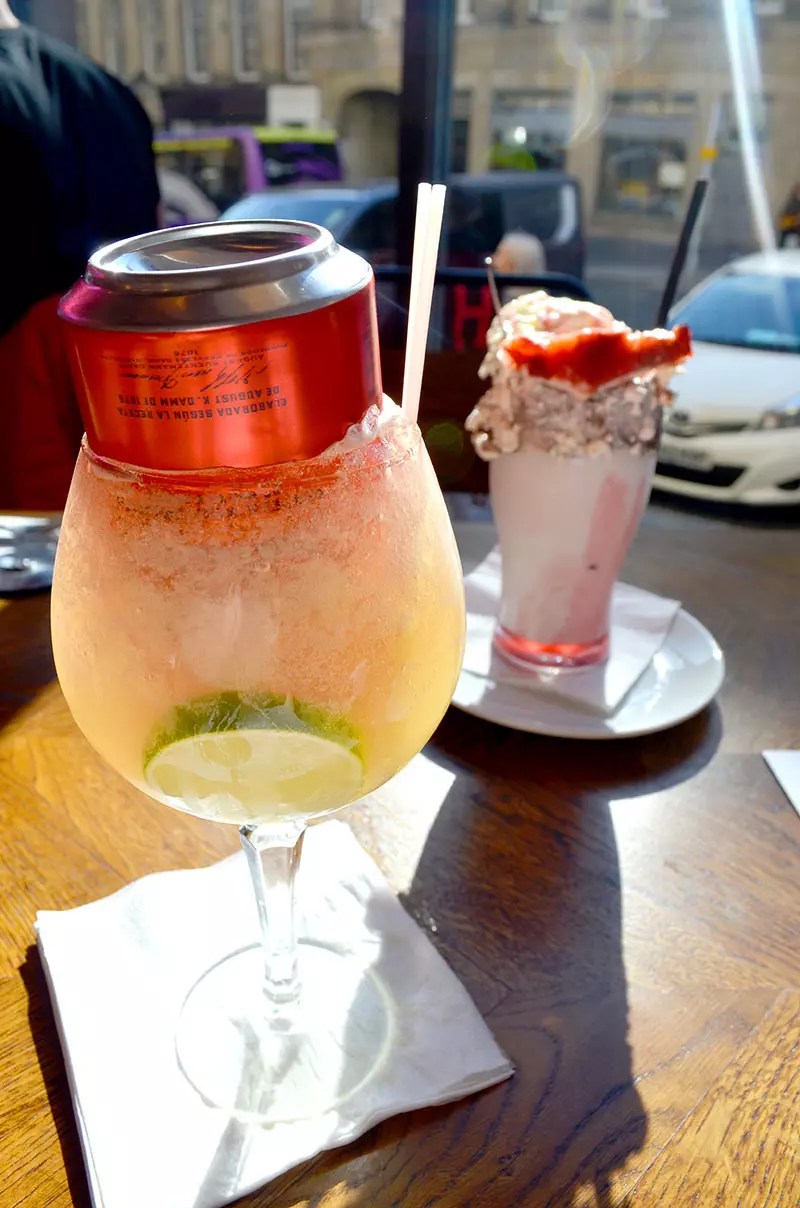 After staring at the mammoth amount of topping for a while, I finally decided that the Messy Mexican sounded right up my street. To reiterate, this isn’t an authentic Italian pizzeria, but an Americanised takes on pizza.

(If you want authentic, head to ‘Cals Own‘ in Jesmond. They’re the undisputed champions of authentic pizza for me.) 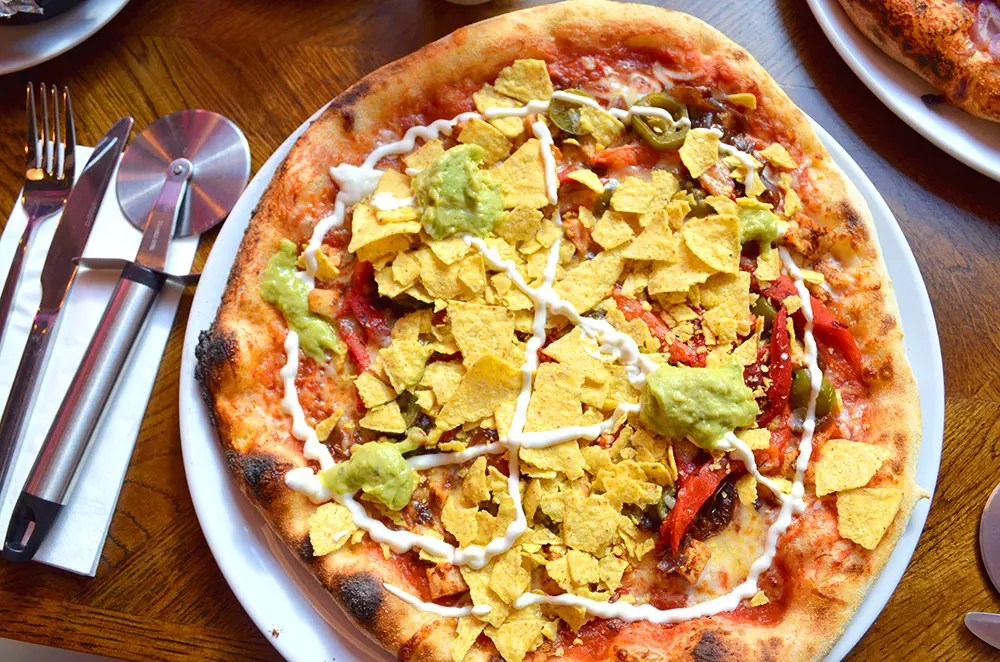 The pizza was as delicious as it was un-Italian to be fair! The sourdough base was lovely and crisp on the outside, with those irresistible blackened patches, and light and fluffy on the inside. That’s what you get with a superheated custom oven!

For my side, I had been tipped off that the candied bacon was an absolute must. It’s a given that when Billy the blond offers you a tip, you have to take it! 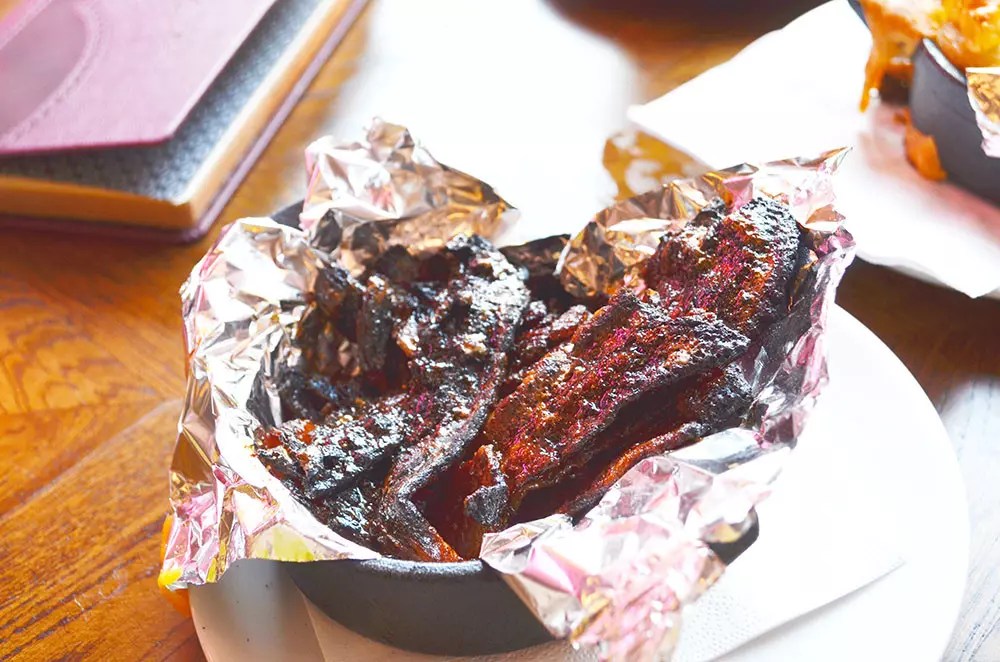 This is the absolute sh*t and worth the trip alone. The crispy, sugar-coated caramelised goodness is bite after bite of heaven. I threw some on top of my slice and lost half to the wife who agreed it was beyond great.

She went for a Parma-Ham, red onion and rocket topped pizzas with a Mac ‘N’ Cheese side. I can say both were delicious, but the side didn’t come close to the bacon. However, given you can get the Mac ‘N’ Cheese WITH candied bacon on top, that’s my next go to! 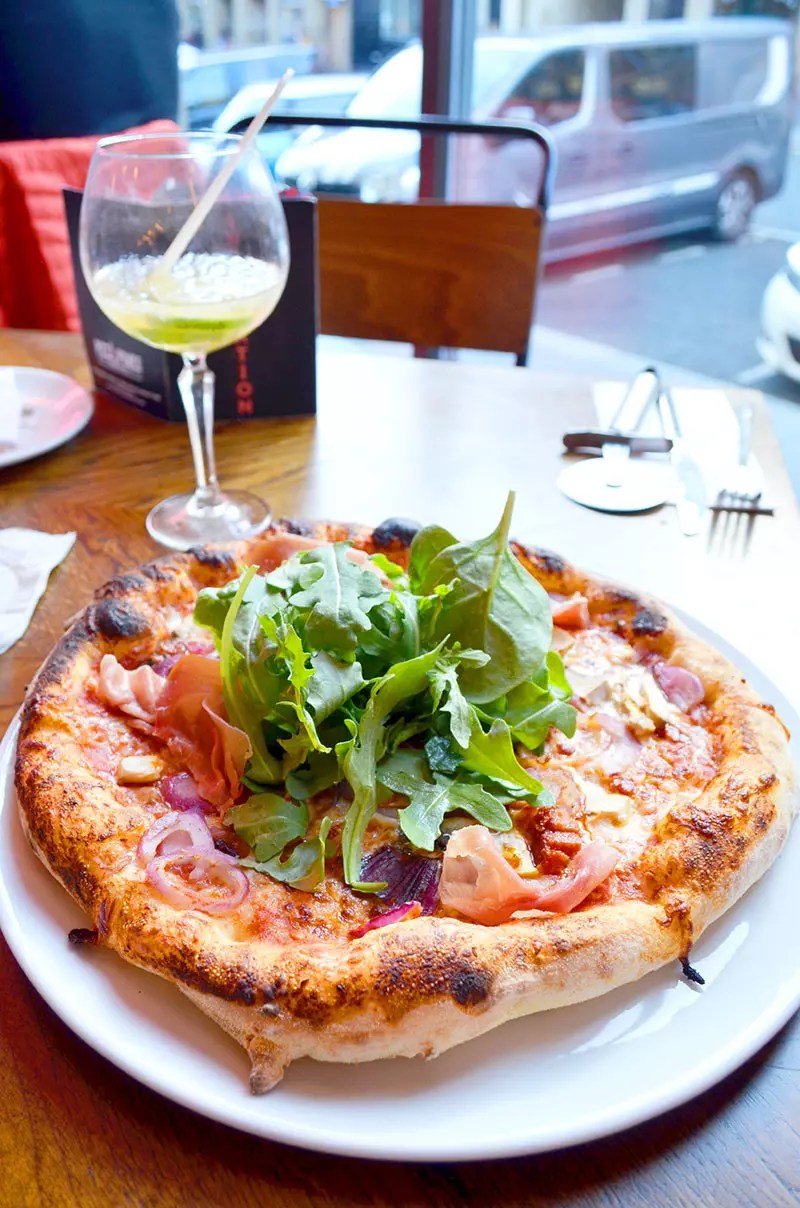 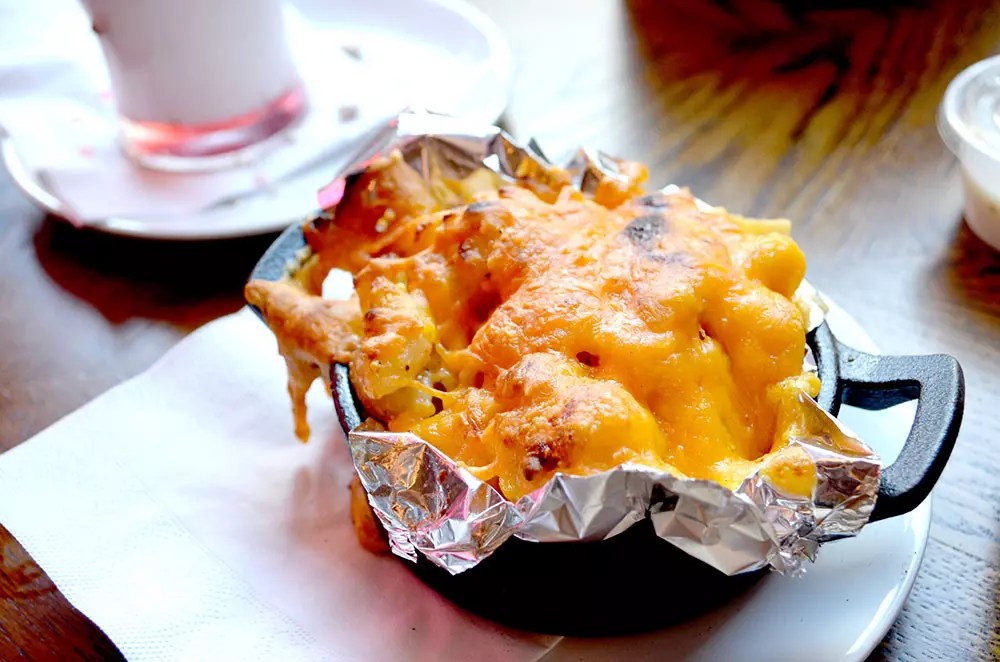 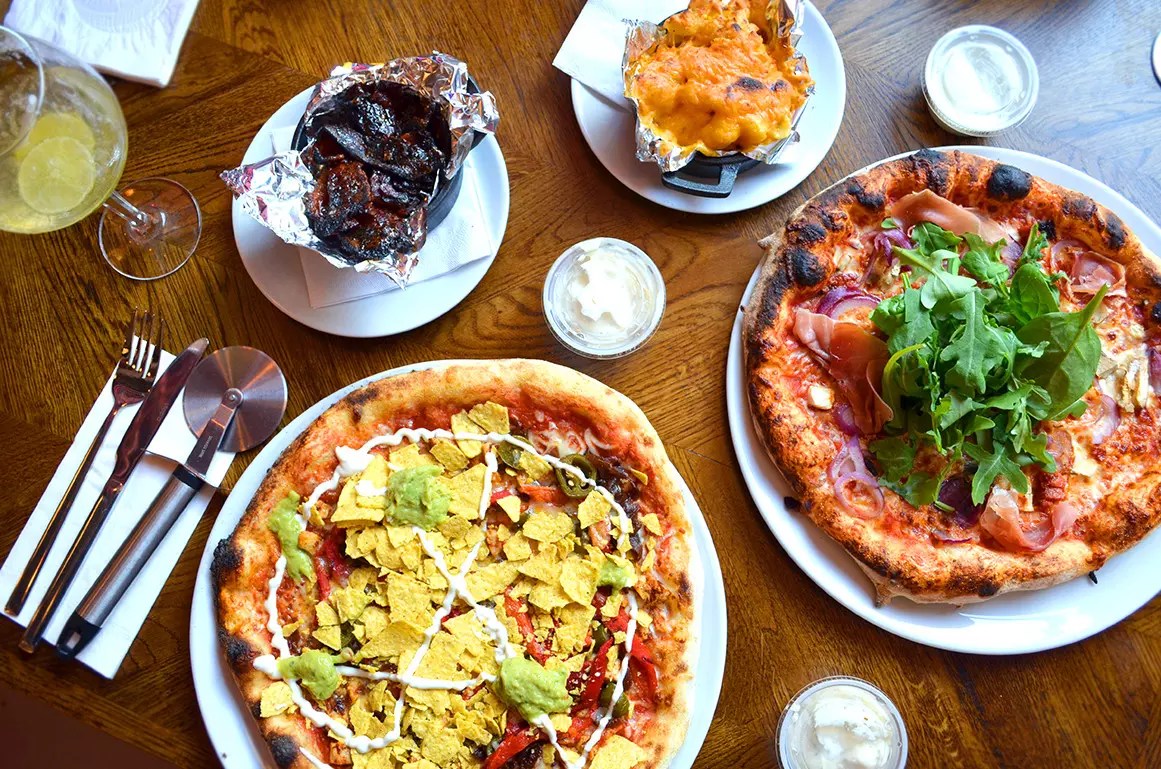 Overall, I thoroughly enjoyed Pizza Punks, so much so I’m heading back on Thursday with the fam, who’ll benefit from the Gluten Free bases! It’s certainly a great place to grab a lunchtime bite or even better to start a night out at, given the great drink selection and well…pizzas.