Over the last year or two, we’ve seen explosive growth in the Newcastle foodie scene with one common factor appearing time and time again…companies focusing on one dish and doing it better than anyone else.

Zapatista serves up the best burritos in the area with super fresh ingredients.  Byron Burgers offer a simple burger menu with a medium rare cooking option unavailable almost anywhere else in the Toon. Well since January last year, Coop Chicken House have dedicated their time to knocking out the best-grilled chicken around. Like they say on their website:

We load the table with chicken cooked to perfection over our fire-pit, add in your sides and dive in.

No pomp, no ceremony – it’s all about the food.”

So one year into service and I decided it was time to check it out. 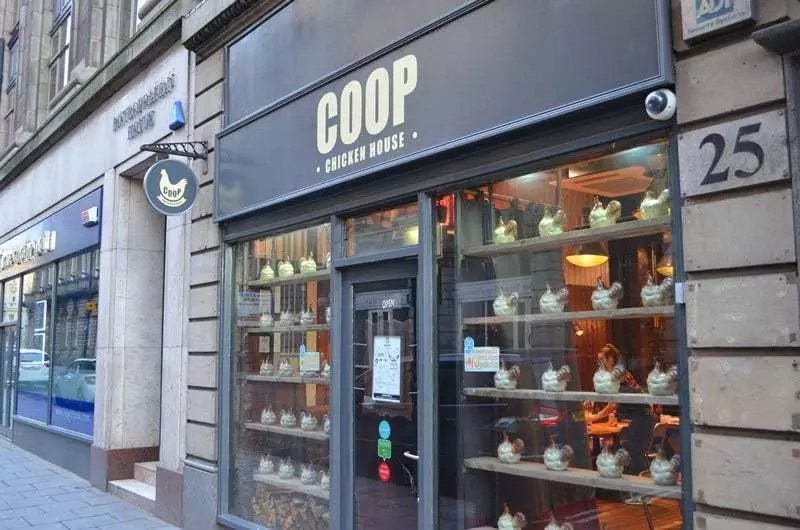 The restaurant is found at 25 Collingwood Street which is a stone’s throw away from central station. If you can’t read the sign, the wall of chickens is a big indicator that you’re at the right place.

We popped in on a Sunday afternoon which was rather quiet, but it quickly filled up after our arriving. We were greeted right away by their really friendly staff and gave us some menus to look over.

The menu offers a really simple selection; with the main items being a quarter, half or whole cooked chicken with a selection of sides. But since there is only grilled chicken, the reverse of the menu is dedicated to an epic selection of sauces to spicy up your plate. 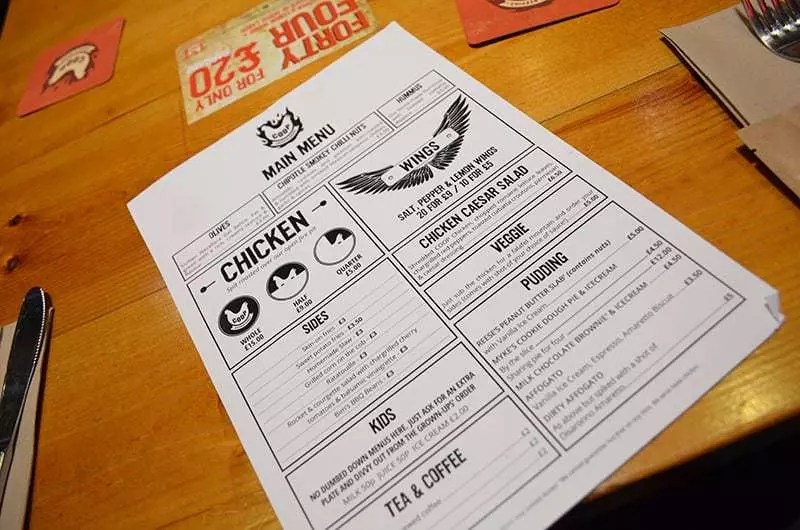 At first I was totally sceptical of somewhere that offers a quite limited selection, but once you’ve tried the sauces you realise that’s where you could try a hundred different dishes!

We kicked off with 20 salt, pepper and lemon buffalo wings (￡9) between the three of us. These we’re cooked to total perfection, with a crispy outside balanced with juicy succulent meat on the inside. The seasoning complemented the dark meat really well; and in all was a kick ass starter, especially with a nice cold Red Stripe like I had! 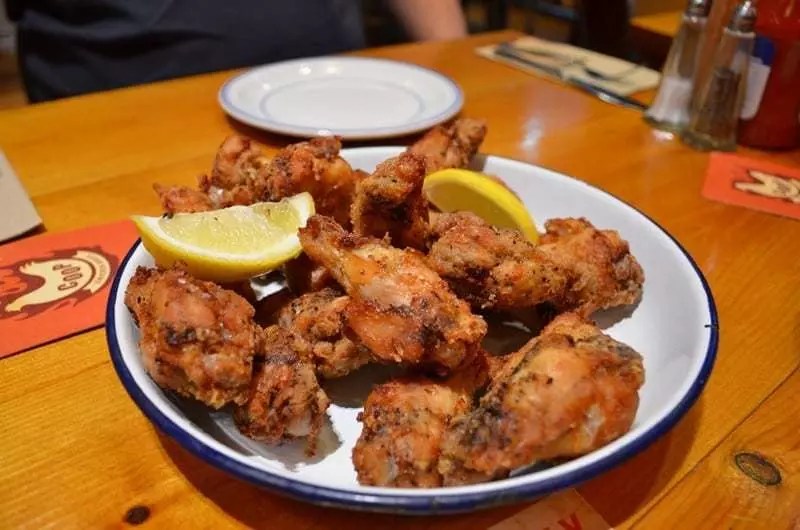 They’re offering 40 wings and a four pint pitch of house larger on Mondays and Sundays, so it’s more or less been decided that this has to happen during a day out in Newcastle soon.

Next was the main course, which was a half grilled chicken each, sweet potato fries and the shot of sauce of our choice. Once again the chicken was cooked perfectly, with well seasoned crispy skin on the outside and that oh so juicy meat sealed within. My keyboards getting a bit dribbled on thinking back to that chicken… 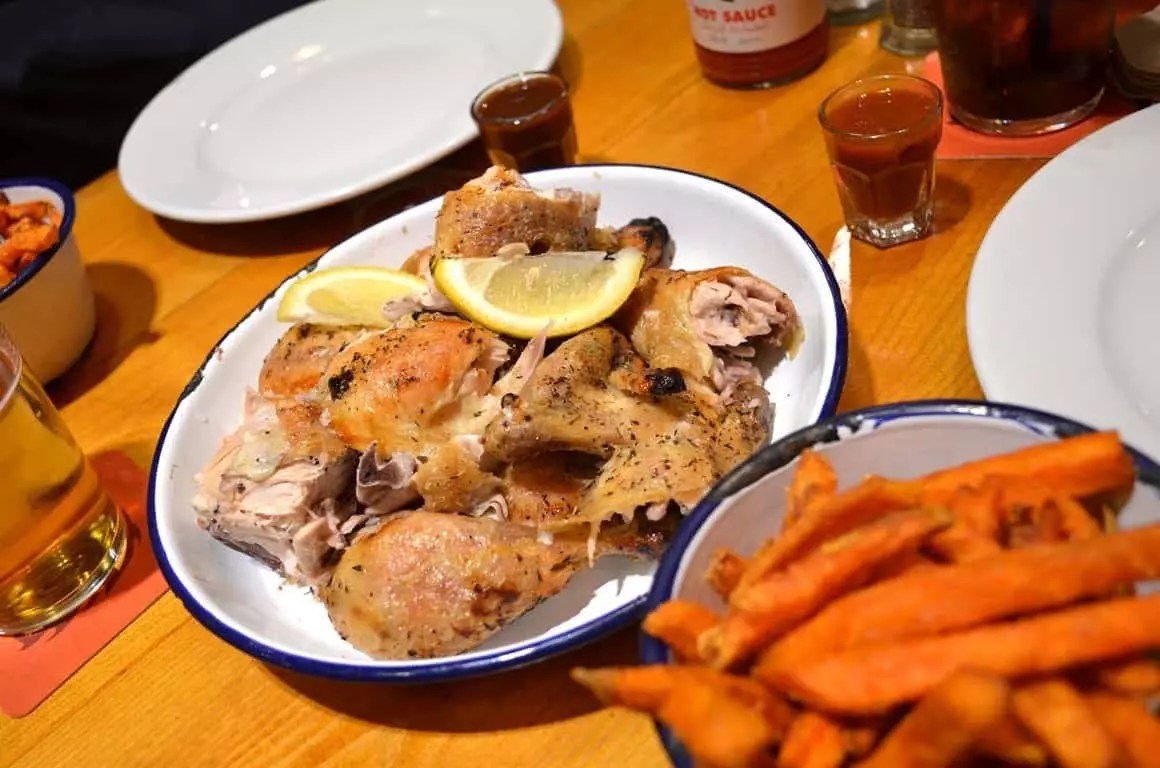 Straight off the grill to your table in under a minute, it doesn’t get better than that! The chicken comes portioned out into about 7 pieces which makes for good dipping in your sauce.

As I said, the sauces make the meal as much as the chicken itself and there’s more than enough choice to find something you’ll like. Everyone I’ve talked to has their favourite sauce and swear blind it’s the best on the menu. If you all have a similar taste in food you can even order a bottle of sauce for the table, which is pretty cool given how nice they are. 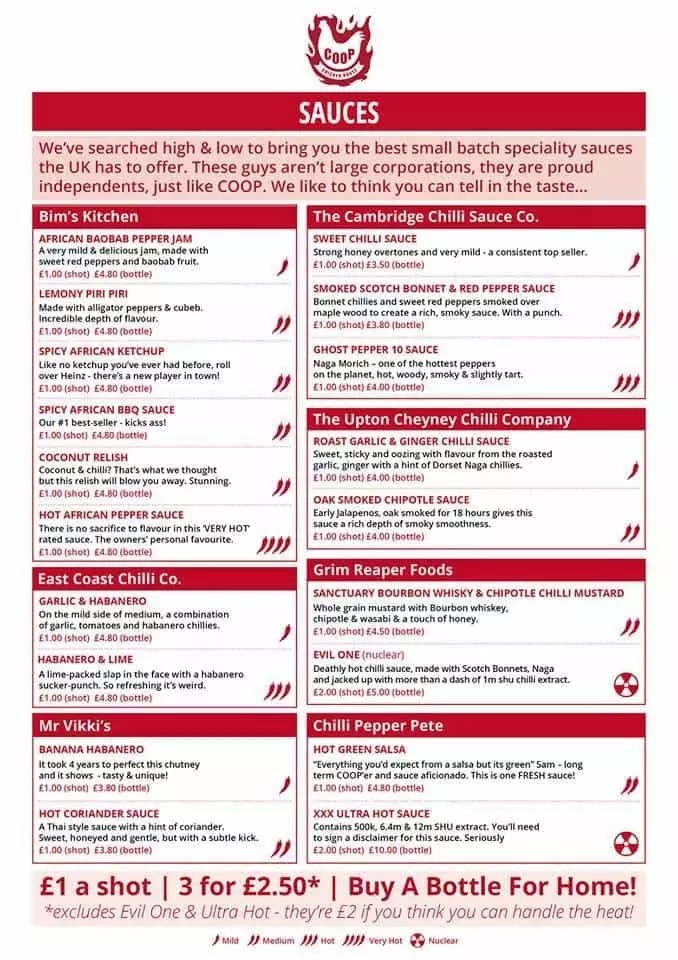 I tried the Garlic and Habanero which was insanely nice. It was really mild but added a nice tangy kick to the meat. Needless to say, we each sampled all of the sauces we ordered, but I stand by mine as the best.

I’ve been wanting to try Coop Chicken for absolutely ages now, which in itself has built a certain level of expectation. Coop chicken absolute smashed it and serve up some of the tastiest grilled chicken I’ve had in years.

With a total cost of ￡23 between three people, with chicken wings, half a chicken, sides and 2 drinks each it’s certainly great value for money too with all of us full by the time we left.

With it only being a stone’s throw from central station I would recommend anyone knocking about in the town to give it a try and imagine it would make a killer lunch treat if you work through there!

For someone who was totally skeptical about a limited menu only offering a few variations, the range of flavours and amazingly cooked meat that landed on our table showed me that when a restaurant focuses their efforts on one dish, they don’t just get it right, they get it amazing!